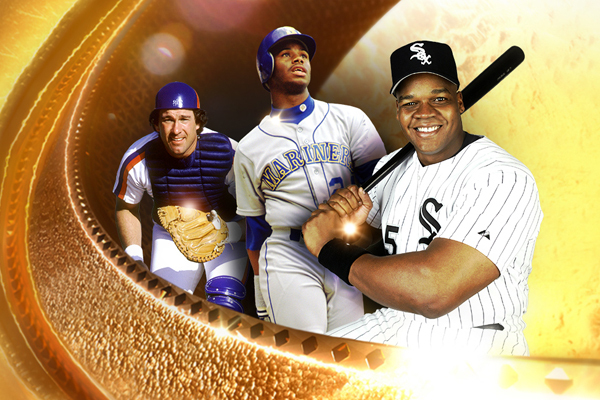 People travel from all over the world to visit the Baseball Hall of Fame. The names on the plaques that line the walls spark the visit. They travel to honor their favorite players, relive the best plays and maybe celebrate a long past World Series win one more time.

Baseball wouldn’t be what it is without the players, the Hall would just be an empty building without them to celebrate. Players, themselves, go back to visit their own plaques year after year. We are excited to honor the players in our 2022 Hall of Fame Series.

Meet ten of the thirty players you can hope to pull in your packs tomorrow:

‍The first overall pick by the Seattle Mariners out of high school in the 1987 MLB Draft, Griffey Jr. was no stranger to being the youngest player on the field. After mashing his way through the minors as a teenager, Griffey made his MLB debut at just 19 years old earning him the nickname “The Kid”.

Known for what many regard as the sweetest swing of all time, Griffey launched 630 homers while playing some of the best defense in center field the game has ever seen. In Griffey’s 22 seasons, he was a: 13 time All Star, 10 time Gold Glover, won seven silver sluggers, an MVP and three Home Run Derbys.

Maybe the coolest thing about Griffey’s illustrious career is that he is the only player to ever take the field with his father. Both Ken Griffey Jr. and Ken Griffey Sr. shared the outfield for the Mariners in 1990 and 1991. The father son duo famously hit back to back homers in what is to this day one of MLB’s most surreal moments.

Injuries throughout Griffey Jr.’s career resulted in him missing multiple seasons worth of games and many feel that if not for the tough luck health wise, The Kid could be MLB’s all-time home run leader. 630 homers and 2781 hits along with being one of the best defensive center fielders in MLB history was more than enough to get Griffey into Cooperstown, earning the third highest vote percentage ever at 99.3%.

Bob Feller started his major league career at the ripe age of 17. Feller was known for his fastball, which was tested against the speed of a motorcycle due to lack of radar guns in 1936. Like Warren Spahn, Feller hung up the cleats for four seasons to join the U.S. Navy after the bombing of Pearl Harbor. Leaving at the height of his career, he came back and picked up right where he left off.

Feller was inducted in 1962, at the time of his passing in 2010 he had the most years in the Hall of Fame than anyone ever.  Bob Feller led the American League in victories six times and strikeouts seven times. He accomplished three no-hitters, 12 one-hitters, 279 complete games, and 44 shutouts, he was the dominant pitcher of his generation and one of the greatest of all time.

‍1942 is a year that will always be remembered by fans of Spahn. In that same year, he made his big league debut and also left to join the Army to fight in the Battle of the Bulge. Due to the hiatus of defending our country, he didn't get his first major league win until the age of 25. Even so, Warren Spahn became the fifth-winningest pitcher of all time. In the 21 seasons he played, Spahn went 363-245. Growing up, he wanted to become the next Lou Gehrig, and he did a pretty good job. Spahn ended his career a 17-time All-Star and an ERA of 3.09. He was elected into the Hall of Fame in 1973.

Ryne Sandberg entered the league out of high school as a round 20 pick by the Phillies in the 1978 draft. He had a late call up in the 1981 season only to be traded to the Cubs following the season. That trade, which originally did not include Sandberg, brought a shift in the Wrigley clubhouse.

The third baseman finished 6th in Rookie of the Year voting after a season with 32 stolen bases and 33 doubles. That following season he shifted to second and won his first of nine straight Gold Gloves. By the time of his retirement in 1997, Sandberg had led the National League in most categories possible as a second baseman. Sanberg was part of the 2005 Hall of Fame Induction class.

Tom Seaver, aka Tom Terrific, helped bring the New York Mets their first World Series Championship ever in 1969. That same season, the right-handed pitcher also won his first of three Cy Young Awards, all with the Mets.

Part of the illustrious 300 Win Club, Seaver is one of just 10 players to eclipse 300 wins since 1980. Seaver posted 13 individual seasons with at least 15 wins and is sixth all time in strikeouts with 3,640.

Seaver pitched for the Mets, Reds, White Sox and Red Sox in his 20-year career, making 12 All Star appearances. Inducted into the Hall of Fame in 1992, Seaver earned the fourth-highest ballot percentage in history at 98.8%.

‍Known as the Wizard of Oz, Ozzie Smith became one of the best, if not the best, shortstops in the game. His career started back in 1977 when he was chosen by the San Diego Padres in round four of the draft. He made the Opening Day roster that following April 7, 1978. In 1981, he was traded to the St. Louis Cardinals and brought with him his acrobatic moves in the infield. Throughout his career, Smith was a 15-time All-Star and won 13 consecutive Gold Gloves. He hung up his glove in 1996 and the Cardinals retired his jersey along with him. After his 2022 induction, Ozzie Smith is now remembered in Cooperstown for years to come.

‍Nicknamed “The Big Hurt” because of the damage that he could inflict on baseball, Thomas was more than just a power hitter. One of nine players in MLB history with a career batting average above .300 and more than 500 homers, Thomas paired brute force with finesse on his way to more than 2,400 hits.

Standing at 6-foot-5, 240 pounds, it may not come as a surprise that Thomas also played football at Auburn University. Ultimately, Thomas chose baseball and two MVPs, four Silver Sluggers, five All Star nods, a batting title and a hall of fame induction would say that he made the right decision.

Thomas is one of the greatest players to ever put on a White Sox jersey, holding franchise records in: on base percentage, slugging percentage, home runs, extra base hits, RBI’s and walks. The Big Hurt would go on to play 19 seasons with three different teams, sixteen of them with the team from the south side of Chicago. He was inducted into the Hall of Fame in 2014.

Robin Yount started his career as the third overall pick in the 1973 draft, and ended it a 2-time MVP in 1993 - still a Milwaukee Brewer. Shortly after his retirement, Yount was inducted into the Hall in 1999.

In his career, Yount won his two MVP awards. The second in 1989, when at the time, he was only the third player to win MVP in two different positions. His first was won at shortstop, then a shoulder injury shifted him back to the outfield where he earned his second MVP award.

In his rookie years, Yount set a new big league record for games played as a teenager with 242. Along with his fielding abilities, he established himself as a power hitter, eventually becoming the 17th player (and third youngest) to reach the 3,000 hit mark.

One of the best catchers ever, Johnny Bench rewrote the standard for catchers. Bench spent his whole 17 season career in Cincinnati (1967-1983). The 10-time Gold Glove winner helped the Reds to four NL Pennants and two World Series titles.

Bench was more than a catcher when he stepped into the batter’s box. With almost 400 home runs, he led the league in RBI three separate seasons and home runs twice. Bench was a 1968 NL Rookie of the Year, two-time NL MVP, 14-time All-Star and a 1976 World Series MVP. After his long season and impressive resume, Johnny Bench joined the Baseball Hall of Fame in 1989.

If you look at the Royals record books, you’d almost have a harder time finding a statistic that George Brett does not sit atop of thanks to 21 impressive seasons in Kansas City. One of 33 members in baseball’s vaunted 3,000 hit club, Brett finished his career a .305 hitter with more than 300 home runs and 200 stolen bases. One of the most pure hitters of the modern era, Brett struck out just 908 times in 11,624 plate appearances and never punched out on more than 75 occasions in a single season.

Brett owns plenty of hardware, winning an MVP with one of the best seasons of all-time in 1980 along with 13 Alll Star appearances, three batting titles, a World Series ring and a Gold Glove.

The career-Royal achieved baseball’s highest honor in 1999 when he was inducted into Cooperstown with 98.2% of ballots voting him in.