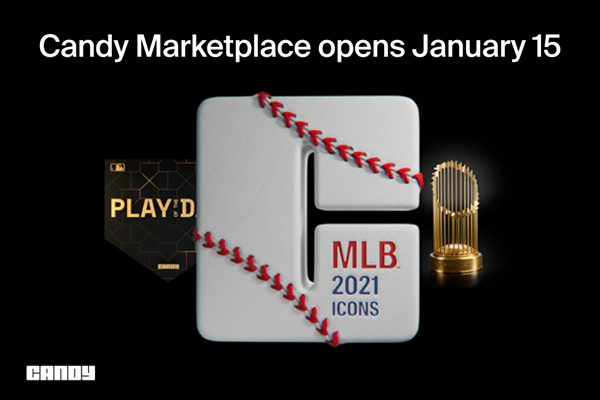 The Candy marketplace opens TOMORROW and we want to make sure you know your way around. Our secondary marketplace will be operating 24/7 for early morning buyers, late night browsers and baseball diehards.

This marketplace will house all Candy x MLB products we have launched thus far (excluding items from Bitski, for now). This means MLB 2021 Icons All-Star & Uncut Diamonds, Plays of the Day, the Candy Jerseys, and World Series Trophies could all be listed.

Full All-Star and Uncut Diamond packs are still out there waiting to be opened. Pick one up to unlock what’s inside! You might just snag a great one. There's over 20 MLB All-Star Legendary 1 of 1 icons that haven’t been pulled as well as a handful of Uncut Diamond 1 of 1s. 👀  Take a look a few of the Icons yet to be pulled:

The Mike Trout legendary 1 of 1 is still out and ready to be picked up. Already considered one of the best to ever play, Trout is a 9-time MLB All-Star, 3-time AL MVP and has taken home eight Silver Slugger Awards. Oh, and he’s still only 30 years old.

San Diego Padres superstar shortstop Fernando Tatis Jr. is still up for grabs as well!  El Niño launched 81 home runs and signed a $330 million contract before his 23rd birthday and has finished top five in MVP voting in his first two full seasons.

If you’re a fan of the Field of Dreams, you might want to cop a pack just for the chance to pull the Tim Anderson 1 of 1. One of the coolest moments of the year, Anderson called game by launching a walk-off home run into the corn fields in last year’s Field of Dreams matchup.

As teams vie for Carlos Correa in free agency, collectors will be lining up to try to pull the Puerto Rican star’s Legendary NFT. Two-time All-Star, 2015 AL Rookie of the Year, and 2021 Astros MVP are all part of Correa’s growing resume. And just imagine being the number one draft pick at 17 years old.

‍Vladimir Guerrero Jr.’s rarest card is still up for grabs. Vladdy may be a junior, but there is nothing small about his production, launching 48 home runs and finishing just shy of the AL Triple Crown in 2021.

‍Julio Rodriguez is poised to be an AL Rookie of the Year favorite next season for the emerging Seattle Mariners and his Legendary card has still yet to be pulled. J-Rod has blazed through the Minor Leagues as a teenager, hitting for average and power with the swagger to back it up.

The Baltimore Orioles picked up a good one with Adley Rutschman. The 2019 number one draft pick has a lot to offer on both sides of the ball. Commanding behind the plate mixed with a rare swing and miss, don't be surprised to see him step on the field early in his career.

Below you can find the full list of legendary cards still out there!

For our collectors and competitive fans, if you collect all 81 MLB Icon All-Stars OR all 30 Uncut Diamonds in ANY rarity you can earn a special collection reward NFT.

Take a look at our collection functionality coming to the site later this year!

To kickstart your collection game, we’ll be giving away unopened packs everyday from January 13th-18th. To be in the running, keep tabs on our Twitter @CandyDigital! 🍬

All-Star Legendaries NOT pulled as of 1/13:

Part of being a sports fan is getting amped about a huge diving catch, a clutch strikeout or an out of the park home run. Candy created the Play of the Day NFTs to highlight those top plays and give you a collectible to relive that moment. All-Stars wouldn’t be all-stars if it weren't for what they’ve accomplished - here is Candy’s list of the top 5 Plays of the Day from the 2021 Postseason!

1. Braves Win World Series: The final out is one of the most emotional moments in baseball. Freddie Freeman hid the baseball away right before his iconic celebration moment, shooting both arms up and jumping from first base. Home runs from three different Braves contributed to that win, ending the 26-year streak without a trophy.

2. Jorge Soler Lead-off HR: History was made on October 26, 2021. Jorge Soler became the first player in MLB history to homer in the first plate appearance of a World Series game. Soler and the rest of the Atlanta Braves went on from this moment to win Game 1 of the Fall Classic against the Houston Astros, and eventually winning it all.

3. Chris Taylor’s 3 Home Run Game: You can thank Chris Taylor for keeping the Los Angeles Dodgers alive in the NLCS. Taylor racked up three home runs and six RBI in one game, forcing the Braves to enter Game 6. He had good success in the postseason, ending the St. Louis Cardinal’s season during the Wild Card game with a walk-off home run.

4. Jose Altuve Breaks Records: Records are meant to be broken and Jose Altuve is one bomb of a hit away. In Game 2 of the Fall Classic, Altuve launched one to left field tying Bernie Williams' record for the most home runs in the postseason. Carlos Correa knew what he was talking about when it came to his teammate. “It doesn’t matter if he’s 0-4, he knows in the playoffs you’re one swing away from giving your team a win.” Altuve helped pull out a win and tie the series.

5. Arozarena Steals Home: In the ALDS Game 1, the Tampa Bay Rays shut out the Boston Red Sox. Contributing to the 5 runs scored, was Randy Arozarena stealing home as he caught the Sox sleeping.