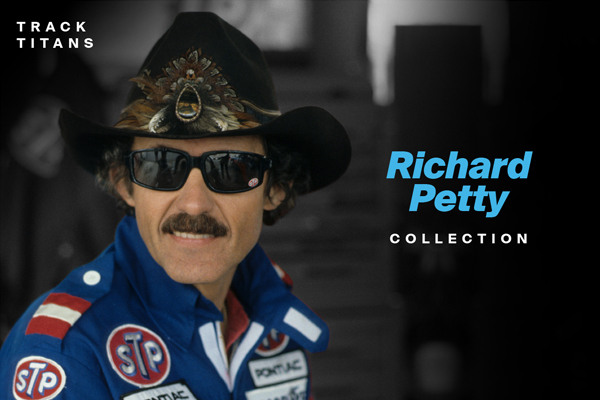 The first ever Richard Petty digital collectible series will be released by Candy Digital starting this month!

Honoring the legacy Richard Petty left on the sport of NASCAR and American culture, this collection commences with a one of a kind auction on July 19th, followed by limited edition cinemagraphs dropping each week.

Details for each product in this collection:

Only ONE of this collectible will ever be produced! A digital bust showcasing The King sporting his signature sunglasses and cowboy hat in his iconic “Petty Blue” finish, capturing the essence of NASCAR's most recognizable face.

The winner of this 1-of-1 auction will also join Richard Petty IN PERSON for two incredible real life experiences:

Richard Petty Randleman Experience: The King himself will take the winner on a personal tour of Petty's birthplace, Museum and Garage, as well as a ride along in one of Richard Petty’s historic cars on the Randleman Roads.

Race Day at the Track with Richard Petty: The winner will also receive credentials to the track, a photo with Richard, and the opportunity to hang in the garage with The King.

Only 85 of this digital bust will be produced, featuring Richard Petty in his signature sunglasses and cowboy hat with an asphalt finish.

Each will be identified with a unique serial number—1 through 85—assigned sequentially in the order in which they are purchased.

All collectors of this bust will also receive a 1/64th scale 1992 Richard Petty Appreciation tour diecast SIGNED by Richard Petty!

Purchase window opens on July 19th at 12PM EST and ends on July 26th, or while supplies last!

In an exclusive retrospective interview with Candy, Richard Petty reflected on the different phases of his career as depicted in a curated series of photographs.

These photos will be used along with interview clips to create 3 cinemagraphs limited to 200 of each.

As a special bonus, collectors that own all three cinemagraphs on the snapshot date of August 17th will be gifted a fourth cinemagraph titled Richard Petty | The Icon.

And, whomever is gifted the #85 serial number of this cinemagraph will also receive an Infinite Object; a digital picture frame that continuously plays the cinemagraph on a loop.