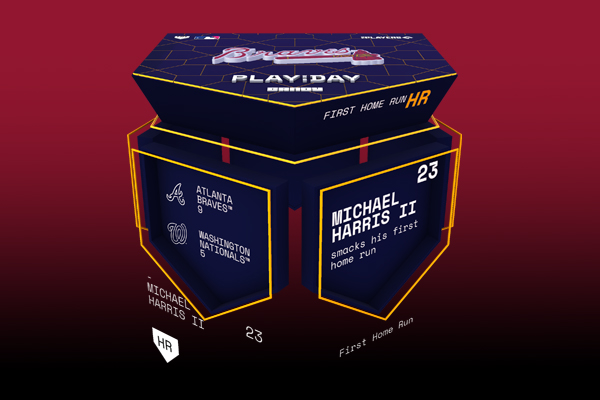 June 17th MLB Fun Fact: On June 17, 1871 Former Civil War General Abner Doubleday, who at the time was a Colonel in command, realized he had some extra room in his war budget. Knowing exactly what he wanted to do with it, Doubleday sent a request to General E.D. Townsend. The request included “baseball implements for the amusement of the men and a Magic Lantern for the same purpose. The fund is ample and I think these expenditures would add to the happiness of the men.”

👨‍👧‍👦To all of our fathers, grandfathers, and stepfathers, by blood or by bonds and especially those who have moved on to the big ballpark in the sky – Happy (early) Father’s Day. 💙

If you are still scrambling for the perfect Father’s Day gift, Candy’s got you covered! Join our Father’s Day Sweepstakes for a chance to win you and your father tickets to an MLB game of your choice and a $25 Fanatics gift card! All you need to do is head to our primary marketplace, pick up a Leadoff Series pack and you’ll automatically be entered! More terms and conditions can be found here.

The 6th and final drop of the 2022 Leadoff Series was released on Tuesday! All 630 players are now out on the market for you to pick up and build a collection that is “Too Cold” (thanks Buxton). The ~full list of Leadoff Series Legendaries can now be found below!

Over half of the 1:1s remain in the packs along with 4 of the ultra-rare Candy World Series tokens! Their utility is still a mystery but it’s worth the wait and rarity.

🔶Lineup 6 Legendaries (italicized have been pulled!):🔶

Something must be flowing through the back works of the marketplace 👀. In the past week, 43 of the 2021 All-Star ICON Packs have been purchased for an average price of $460 and 9 of the 2021 Uncut Diamond Packs were also picked up….maybe someone is looking for those left out Legendaries.

Byron Buxton doing Byron Buxton things on Byron Buxton Night. (Discloser: I’m going to make this whole thing an alliteration). Back in the Twin Cities, Buxton barrelled two baseballs way in the outfield breaking two of Rasmussen’s sliders. Sunday was Byron Buxton NFT Collectible Night for our all Candy Fam - if you went you got the free digital collectible commemorative ticket! I’m sure Bux isn’t much of a boaster but I’d give him a pass for this baller performance.

Another game, another record broken. On Sunday, Matt Carpenter had a stellar game bringing in two home runs, adding to the 9 he already had since he put on the pinstripes. Carp spent 11 seasons with the St. Louis Cardinals before heading to the Bronx to join the hottest team in the league. He proved his spot quickly by breaking the Yankees record for most home runs in their first 10 games.

Goldy, Goldy, Goldy…GONE! Paul Goldschmidt and the Cardinals put on quite the show Tuesday in their double header against the Pirates. Goldy alone had 3 home runs and 8 RBI in the two games. Teammate Miles Mikolas was one out away from a no-hitter in game 2.