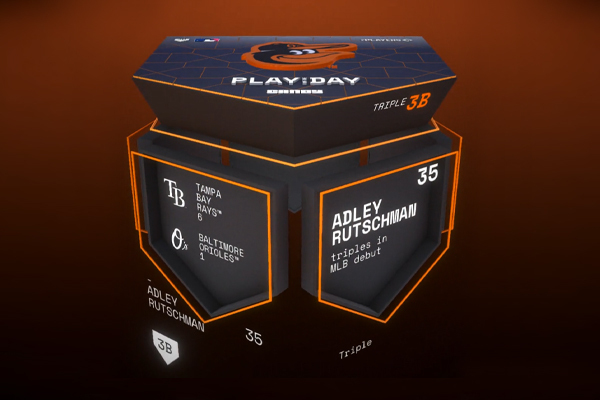 May 27th MLB Fun Fact:  On this day back in 1968, two (kind of one now) franchises were introduced to Major League Baseball: The Montreal Expos (whose run north of the border lasted until 2004) and the San Diego Padres. Before they were officially awarded spots in the National League, they underwent a 10-hour meeting with all other club owners.

Drum roll please - this is new information (not): The New York Yankees are the favorites to win it all and the Los Angeles Dodgers are right behind them.

Eight MLB clubs are offering the NFT tickets to match the season ticket holders' initial purchase. The faithful fans who show up to every game despite rain, sun, or snow will have these Season Ticket Collectibles minted individually and tradeable on the marketplace.

On top of that (!!), the owners of these tickets will also be able to add all Play of the Days featuring their team free of charge. We are so excited to offer these dynamic and engaging collectibles to the sport and fans who want to commemorate and remember their favorite teams.

Leadoff Series, Lineup 5 drops on Tuesday! The rosters per Lineup remain as stacked as ever with beasts like Juan Soto, José Ramírez, and Freddie Freeman. There’s a chance to pull NL Rookie of the Year contender Hunter Greene or maybe your pitching preferences lie with Albert Pujols 🤷‍♀️. Both are hiding in Lineup 5 packs.

ICYMI: Leadoff Series, Lineup 4 dropped last Tuesday, and the first Legendary was pulled almost immediately. The number two for early AL Rookie of the Year frontrunners has entered the chat. Julio Rodriguez has an epic ceiling in Lineup 4 and his already big name might get a lot bigger at the end of this season. Grab a pack and maybe you’ll get lucky.

Tickets here! Get your tickets! The Chicago Cubs Fergie Jenkins tickets are movinggg on our marketplace! These were the first Commemorative Tickets rolled out this season. The highest sold tickets are:

Other big marketplace sales this week are:

Adley Rutschman getting the call up is bringing a kind of life and excitement into Camden Yards that hasn’t been there in a couple of years. MLB’s number one prospect came up ready to go sending the ball deep into right field at his third AB on Sunday.

Two walk-off grand slams in back to back nights? Whew. Monday was Goldy’s 7th career grand slam too; a Candy Legendary proving his spot in that Top 100. Riding on the Hall of Fame Highway, Goldschmidt ranks in the Top 5 for position players in games, home runs, RBI, total bases and WAR since the 2012 season.

20 years in the league? No problem! Miguel Cabrera is batting .300 this season and just brought in his 14th career walk-off putting the Tigers over the Royals at the bottom of the ninth. Not shocking after he surpassed 3000th hits earlier this season. There’s no surprises from this man, unless you didn’t expect him to shimmy so well.